The entire family is REALLY excited about MangoMinster 2010!!! We missed it last year, and so I am prodding Mom to get our entries in early. Mom has said that she wants to start with the easy one first, and she says Mr. Bufus is the easiest of the lot.

Breed: Man-bear-dog-cat-pig (with apologies to South Park); the vet papers say that he is a Maine Coon, although I say he is a Very Large, Venerable Cat

Blog Link: http://lizski.blogspot.com (that would be this bloggie).

Here is his picture: 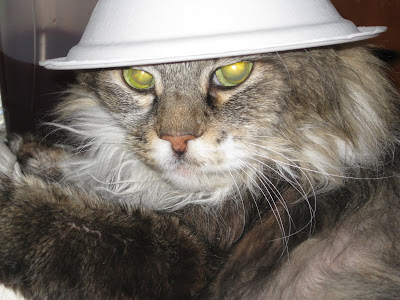 Mr. Bufus is a rescued kitty who has risen to the lofty position of the head of Civil Defense for the Dranow household (the submitted picture shows him in his uniform). In this role, and over his 20 years of life, he has raised generations (note from Fi’s Mom: literally!) of puppies to be respectful of cats, despite having been declawed at an early age (he has a very wicked right cross; for a big lazy cat, he can be very quick when he wants to be!). Mr. Bufus is very much a Cat Dog, as many people has likened him to a dog (even his groomer has said "he’s a great dog" on more than one occasion). He also takes showers (seriously!) and will stand at the shower door when it is running and will meow to be let in. He doesn’t seem to care that he gets soaked. (Which might make him more of an alien than a Cat Dog, but that’s neither here nor there…) Mom and Dad say that he is a man-bear-dog-cat-pig, but I think that is because they watch too much South Park. Mr. Bufus travels Very Well in the House With Wheels, and likes throwing up in visitors’ hats (just ask my Uncle Charlie, who generously provided a hat for Mr. Bufus’ use). He also has the largest litter box on the market, and still manages to miss, which, I think, is a skill in and of itself.

We think Mr. Bufus has some mad skills!! We think he should win! All Paws UP for Bufus!! Hugs from Chloe & LadyBug, the NY BichonFrises

We think he is destined to do very well in the contest!

Well, I am certainly getting lots of ideas for different divisions. Of course you could always run a sanctioned event that might highlight some of your sissy's "talents."

All that sleeping is a sport in itself as far as I am concerned. Not to mention the relentless cuddling. She might be a hard worker.

He's got my vote for sure! Can I vote?? Well, whatever... he deserves to win.

NAK and The Residents of The Khottage Now With KhattleDog! said...

As The Judge'st with the Mostest fur that khategory, I would love to know how woo would prepare yourself fur me!

Your photo made my Maine Coon Kitty turn green. Niiice! Good luck with the contest.
Twink!

Mr. Bufus would get my vote. I love that your groomer says he's a great dog :)

Mr. Bufus looks like a winner to us!
We've entered too!!!
Licks and sniffs,
Zack, Sassy and Buddy

Great to learn about Mr. Bufus!! I might even allow a cat into my house if it acted like a dog! Good luck in the contest, see ya there!!