It was with the heaviest of hearts that Mom told us of our Relentlessly Huge friend Mango's crossing of the Rainbow Bridge early this morning. 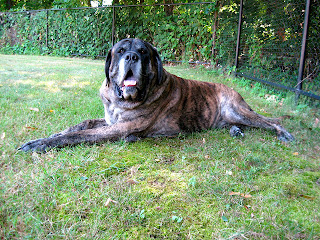 Mango was one of our very first friends in Blogville, and over the intervening years we have had the honor of sharing many fantastic moments with him, including three years of Mango Minster, a fantastic date (well, we thought it was fantastic - the RH might have been a wee bit terrified), and many other adventures too numerous to mention.  Additionally, Mango introduced us to so many new friends who have enriched our lives.  Mom even found her super nerdy twin in Mango Momma.

The passing of Mango leaves a Relentlessly Huge hole in our hearts.  We can only imagine the reception the RH has received across the bridge from his many friends and fans who have gone before him.

While we only ever met you virtually, we feel that we knew you well, Mango.  Thank you for allowing us to be a part of your life.  You will be missed, but your legacy will carry on for generations. 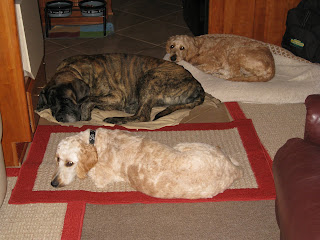 So, another weekend, another doggie class!  Again, we were the only doggies in the class.  Mom says it's because the other doggies in Park City have heard about us, but I think it's just because 11am on a Saturday morning may not be compatible with other doggies' schedules.   Heehee.

Since we were the only doggies, we did another 'on the town' class.  If you've been hiding under a rock, erm, not following us regularly, our Petco is located in one of those 'planned communities' that has stores and residential areas and restaurants and grocery stores and access to a protected wetlands area, as well as a bunch of other stuff.  So, it's very easy for us to go out and "experience new things."

First we did some basic 'sits' - just to show we could...

Then we went over to the Scary Fountain.  (Why is it scary?  Well, 'cuz water splashes off it in a Most Disconcerting Manner.)

As you can see, I was keeping my distance, in case any Naiads leapt out at my unsuspecting self.

Fortified by lamb lung treats, we agreed to lie down near the Scary Fountain.

And we were both so brave we allowed Mom to take more pictures of us by the Scary Fountain. 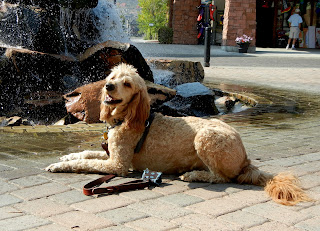 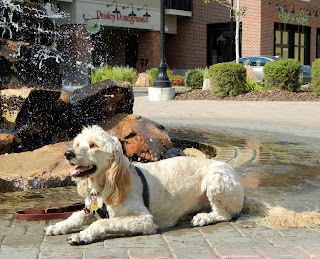 These photos may or may not be appearing in a calendar available soon!

After the Scary Fountain, we went into the toy store.  Mom and Jessi (the turkey hotdog lady) are Vastly Amused by the toy store, and spend a great deal of time being doofuses generally acting silly, with Abby and myself being forced to endure their silliness.

Heehee.  Did I mention that Mom and Jessi are goofballs?

After wandering around the toy store some more, and being subjected to petting from little kids, we headed back outside for another 'photo op'.

And then we were back to Bed, Bath and Beyond.  Now as some of you have pointed out, Bed Bath and Beyond wouldn't seem to be the most doggie friendly store in the world.  Not like, say, Home Depot or something.  Well, Park City has a large population of doggies, and a large population of doggie owners who like to take their doggies with them Everywhere.  (Well, duh.  Who would want to leave us behind?)  So well-behaved doggies are nominally allowed in pretty much any store where it wouldn't be a direct health code violation.  And since we can pretend to be Well-Behaved Doggies, we aren't ejected from Bed Bath and Beyond.  Well, not yet, at least.

And there were some other doggies in there that Looked Just Like Us!!!! 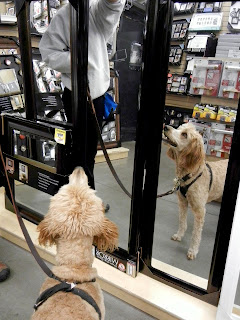 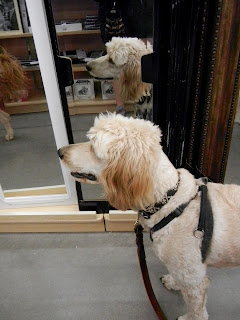 What good looking doggies!  Too bad they ran away!  Heehee.

Then we checked out their doggie section.  (Who says this isn't a doggie-friendly store?) 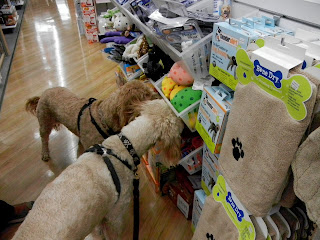 And then we BOTH ended up with monkeys on our backs.  Really.  Mom and Jessi are Easily Amused...

Just so you know, we were Well Rewarded for these humiliations.

Then Mom and Jessi got the brilliant idea to go check out 'window treatments'.   Eh, anything that has 'treat' in it can't be all bad, right?

And I took my turn, too.


There is a vicious rumor that I may (or may not) have taste-tested one or more of the items hanging around my neck. 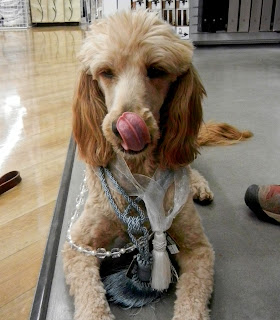 I assure you that there is absolutely no truth to this rumor.  None whatsoever.  And there was no damage.  So the no-harm-no-foul rule totally applies.  If I had done anything.  Which I didn't.

Moments after our adornments had been removed, the store manager arrived on the scene, and Mom and Jessi totally thought they were busted.

Instead, the managed chatted pleasantly about the morning's Strut Your Mutt event in Salt Lake (we didn't go - we are 'cat nappers' every year...), and then commented on what 'well-behaved' doggies we were.  We managed to look all innocent and super well-behaved, and we were welcomed in the store.

After that, however, Mom and Jessi decided it was time to make a hasty egress, although they are planning to bring us back next week.  Who knows what trouble we'll be able to get into next week!  Heehee!   Another Most Awesome Doggie class!

For those of you who are wondering about the educational value of this class (*yes Granny, I'm looking at you!*), we are working on people skills - that is, being comfortable around people in 'normal' situations, and we are also learning how to cope with stressful situations (like having certain people stick monkeys on our backs).  Are we going to run into monkeys in the Real World?  Probably not, but we will be less stressed when it comes time for us to endure the holiday elf hats...

*kissey face*
-Fiona and Abby the Hippobottomus
Posted by Lucy-Fur, as typed by Dr. Liz at 9:57 PM 10 comments:

Labels: doggie class, innocent looks, Mom and Jessi are crazy, not guilty, out on the town, well-behaved doggies

So what have we been up to lately, you ask?  Well, with Mom and Dad frequently gone during the day, Abby and I have been throwing wild parties with the Scotties from down the street.  Um, no.  I didn't say that.  We've been demure doggies, protecting the home front from impending squirrel invasions, scaring away the UPS delivery person, and barking at doggies living across the canyon.  Seriously.  I wouldn't lie to you.  We're totally demure and quiet and well-behaved.

But on the weekends, when we aren't hanging out partying with the Scotties, erm, watching Animal Planet, we've been Good Doggies, going to doggie class

Last week, we had encounters with other doggies, including this crazy Weimaraner puppy.  (Is 'crazy Weimaraner' redundant?  Yuh.  I thought so, too.)

As we were leaving class last week, we also encountered this cute little dude, a 10 week old Great Pyrenees  (does that make him a Lesser Great Pyrenees?).  He was being fostered by a family until he got adopted; he was quite social and cute - and no doubt has already been adopted, as he will grow up to be a ginormous ball of fluff (and muscle). 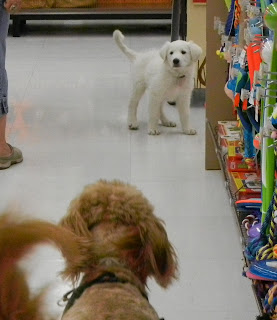 But that was last week.  This week we were the only doggies in class, and so we had another 'out on the town' lesson.  Bed Bath and Beyond is one of our favorite stores; not only do we get to experience all sorts of smells and sounds, but we get to check out the latest sales...

We spent a ton of time in the store, having a grand old time, although I think Mom and Jessi got a little crazy...

And then Jessi was a Really Bad Influence.

But then a store employee wandered by and Mom thought maybe we should go to another part of the store.  Spoilsport!

Then Mom and Jessi started to look at the pet-related stuff.  Abby and I probably should have left at that point, but Mom insisted on more photo-ops.  So we humored her.

Then we did some 'down and stays' to show that we can... 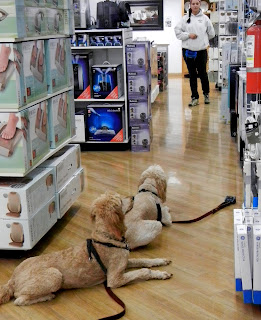 Oh, and we checked out some door mats before we left....

After we left Bed Bath and Beyond, we still weren't done!  In the same shopping area, there is a stationery store in which resides a little doggie who was also in the process of teaching his Mom how to give him treats.  So we stopped by to see how little Milo the one-eyed terror, erm terrier,  was doing.  Apparently this was a "good experience" for us all... 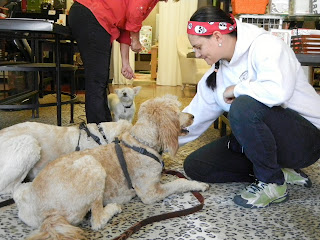 Well, there were lots of treats involved, which pretty much guarantees a good experience! 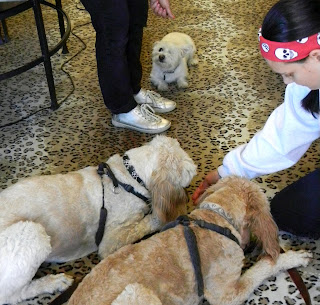 And then finally, we capped off our lesson with a little posing by the flowers.  (There was a bench nearby Mom wanted us to pose on, but there weren't enough treats let to convince either of us to get up on it!) 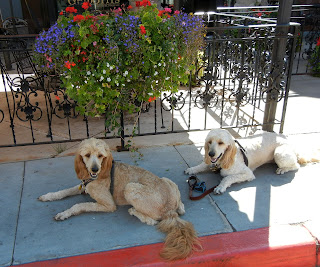 All in all, it was a Most Excellent doggie class.  And Abby and I are looking forward to wreaking more havoc in Bed Bath and Beyond the next time we get a chance!  Heehee!

PeeEss:  While Bed Bath and Beyond may not technically be a 'doggie friendly' store, Park City has a very large doggie population, and most people bring their doggies anyplace not specifically barred by health codes.  We were not the only doggie in the store, BTW, and we have seen other doggies in the store on other visits.  They don't call it 'Bark City' for nothing, ya know!
Posted by Lucy-Fur, as typed by Dr. Liz at 9:44 PM 12 comments:

Mom thinks she is So Sneaky.  See, on Saturday mornings we always have doggie class at 11am.  So this last Saturday, when Mom loaded us up in the car we figured we were going off to see Jessi the Turkey Hotdog Lady, and get lots of noms.  Imagine our surprise when we ended up at the doggie spa instead! 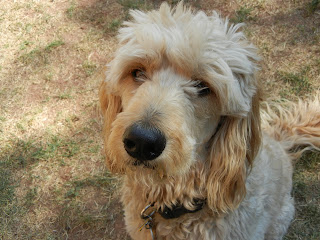 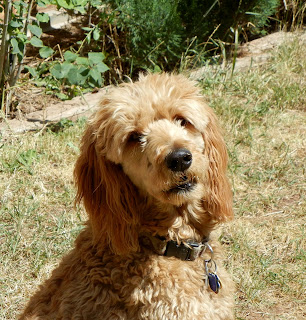 But really, just because we were shaggy and hot and losing our eyeballs, did that really merit pulling us out of doggie class to go to the spa?

Abby and I were NOT impressed with this turn of events.

We sure showed her, huh?

However, the siren call of the frisbee quickly attracted our attention, and our initial displeasure was soon forgotten. 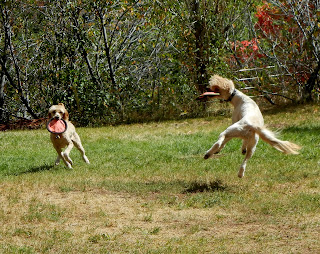 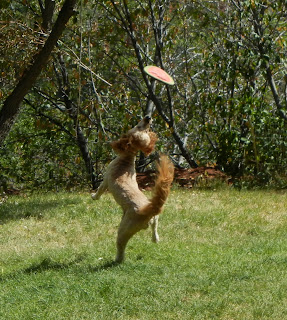 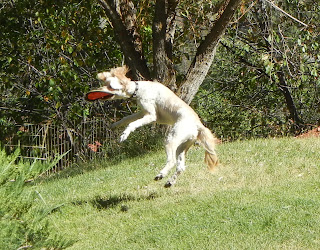 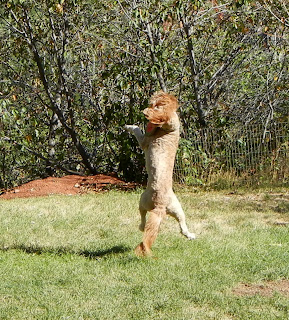 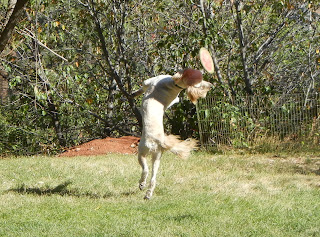 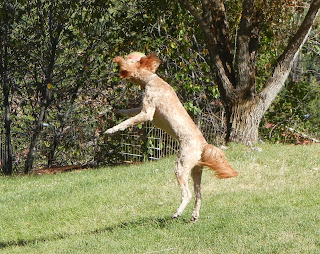 Okay, so maybe we're more aerodynamic with our haircuts.  And we're cooler, so we can play longer.  So I guess we'll forgive Mom.  Eventually.  After she throws that frisbee a few dozen more times!

*kissey face*
-Fiona and Abby the (newly shorn) Hippobottomus
Posted by Lucy-Fur, as typed by Dr. Liz at 9:28 PM 12 comments: