Heh. Mom and Dad should be more careful when they complain about "not enough snow". Because you what they say about being careful what you wish for... 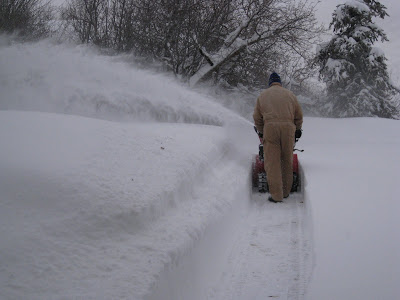 Dad should have Uncle Charlie turbo-charge the snowblower. Even if it IS the biggest, best Honda on the market already. You can never have too much power/throwing distance!

Once Mom and Dad were done slaving away (Dad does the hard work - i.e. ALL of the driveway - and Mom has the job of shoveling off the porch so TaiChi has a place to piddle, and shoveling off the steps so the UPS man doesn't have to wade through snow, and clearing places in the back that Dad can't get to with the blower), I got to go test out my new track. (We get so much snow that Dad cuts a path for me in the backyard; not that I stick to it, of course, but it gives me a starting point!) 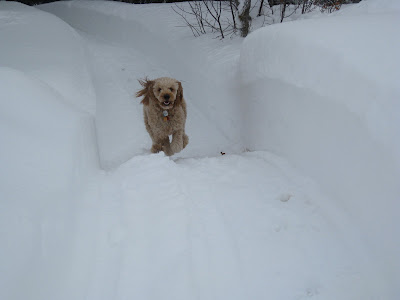 Yep. The path is good! (And you can see how much snow we've got; in places the walls of the path are almost over my head; with the predicted weather, by this time next week, I wouldn't be surprised if the walls ARE over my head!)

To give you an idea of how much snow we've received, here's a picture of me in almost the same spot, 5 days ago. 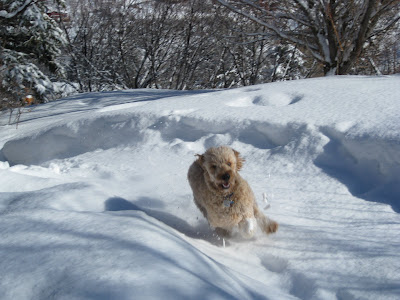 But a girl can't stay on the beaten path forever, you know. 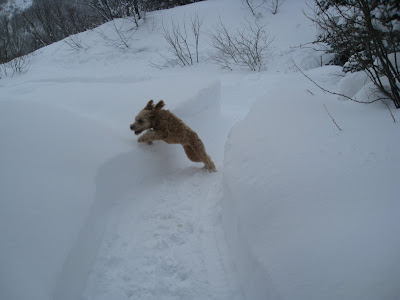 Wow. Um. This stuff is deep! 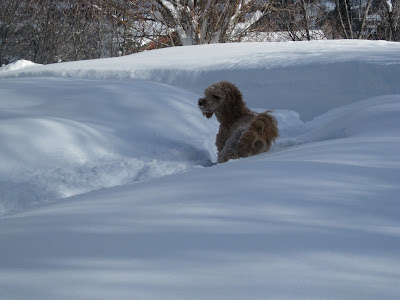 After Mom and Dad had recuperated from their labors, they came out to play with me. Mom got a couple of snow ball makers. (Seriously). Our snow is pretty light and fluffy, and Mom is not exactly the best snowball maker in the world. But there is nothing better than chasing snowballs. (Unless they were, oh, say, beef broth flavored...) Mom has been going out with me and throwing snowballs for me, but it is sort of hard to throw snowballs and get Serious Action Shots at the same time. So, today she got Dad to throw the snowballs while she took pictures. 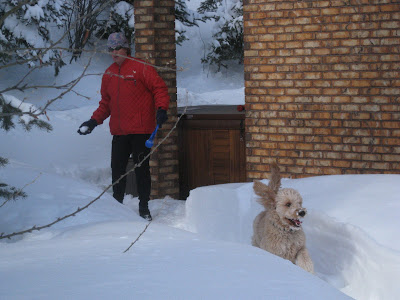 Me? Having fun? Whatever would give you that idea?!?

Unfortunately, the high speed camera was inadvertently stored in the motorhome, so we just have the little camera. Which isn't the best at action shots... But Mom tried. And after many attempts, she got the shot she was looking for. (Sort of. Again, this camera isn't really designed for high speed action shots, so while the snow is in focus, I'm still a bit of a blur. Because I'm speedy. And sporty! ) 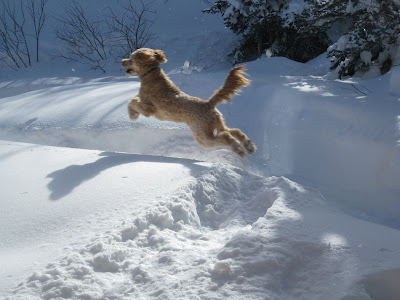 Talk about amplitude! And style! They should make Snowball Chasing an Olympic sport!

And if you need more proof? 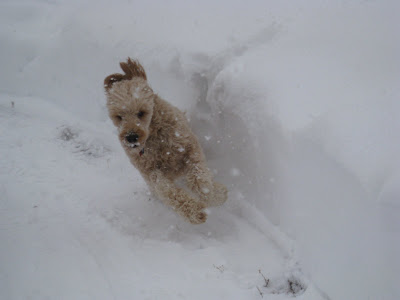 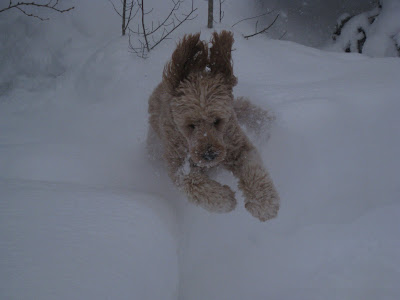 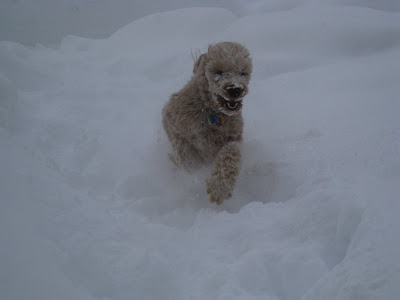 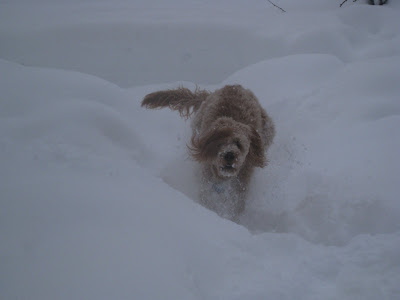 And if you've ever wondered why I always have snow on my snooter? Let's just say I like to hunt down those pesky snowballs.... 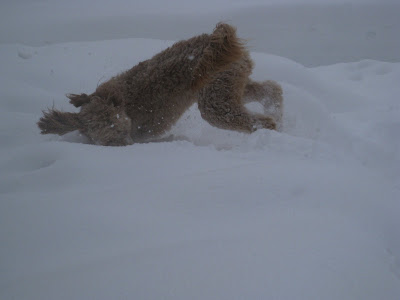 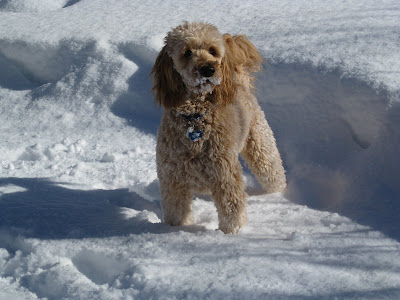 Wait until Crabby Abby gets in the action :-)

Almost all those photos could win the competition. I love the one where you're leaping through like a bunny wabbit. You go, girl! Have tons of fun, Fiona. I get to share every time you post photos.
Twink!

BOL! BOL! BOL!
You are the best Fiona!! Love the action shots! Great one with you diving into the snow too!! Bet it took you a LONG time in the defrosting room after that romp! All out snow has melted, leaving a nasty soggy, dreary earth behind. Ugh. Hate to go out and get my paws all nasty in that mushy stuff. I'm not a snowhog like you, but I'll take it any day over this!

BOL! What fun you are having, Fiona! I LOVE to play in the snow too. Maybe we are Snowdoodles!
Your Mom got some really good action shots.
Luv, Lucy (Woof!)

We love, love, love your snow and all of your action shots. Though we do want to see what kind of snow ball maker your mom got. Our hu-dad is really curious about that.

Hi, Fiona!
That is a lot of snow!
And of course I can see you having lots of fun there!
All the pictures are pawesome!
Kisses and hugs
Lorenza

I can't believe you have your own bobsled run in your yard!! Love watching you run, soooo cute Fi!

That's not snow! That's some sort of advancing glacier! Before you know it there will be mammoths running around with you!

Then again it could just be snow.

NAK and The Residents of The Khottage said...

That is an inkhredible amount of WHITE WONDERFUL WHITE!

Wow... so much snow and I really love all the zoomies pics... you're definitely a sporty poodle, Fiona! I never knew there is such a thing call snow-ball maker, that's so cool.

These are some of the best snow- doggie photos I've ever seen!!!
Super job capturing the pure exhilaration!
Enjoy,
~K

I think these are the best FI pics we have ever seen!!! They really could win ANY competition!! Enjoy that stuff, girlfriend!! Hugs from Chloe & LadyBug, the NY BichonsFrises

Wow Fiona! What snow, what photos!

You look just amazing in the snow - as Sunny said - a real Snowdoodle!

Brillant stuff - we really enjoyed all those pics!

ps, yes that was me as a little pup - had to get a photo from the Training Centre as the gang have no early photos of me! But they were very thrilled to see what I looked like as a young pup!

OMG, what FABULOUS snow shots of you, Fiona!
This is just not fAire! You have tons of snow and we have none!

Love ya lots,
Maggie and Mitch

It made us smile to see how much you enjoy the snow.

Did you move to the North Pole? That is a lot of snow for sure. I like your most athletic levitations. Of course the face plant is priceless.

OMD!!!! Those are the funniest pictures!!!! You sure do know how to have a good time in the snow!!

Are you sure you are not part Siberian Husky? Any hoo....great snow shots!!!!

you sure do look like you love the stuff! the pics make me smile on this monday morning!

Hey Fiona! I'm on my way!! :) Might have to blaze my own trail in the pow to make it out there!
We LOVE seeing you run full blast in the fluffly stuff!!

I know I've told you this before, but I think you are certifiably crazy! Bbbbbrrrrr...I'm shivering just looking at those pics. They are good pics and I'm glad that you like that stuff. All I can say is I'm glad I don't live in Park City!
Snuggles,
Twix

although we are sick of snow now, (thankfully it has disappeared here after hanging around way too long!), it was lovely to view your photos.

I can't even imagine...how do petite girlies like me ever do walkies out there???

These pictures are so amazing!! What a blast!!!