For those of you who have been wondering, we are continuing our doggie education in the hopes of being awarded Ph.D.s in 'Looking Attentive for Treats'.  We're doing a joint dissertation examining the efficacy of different treats in obtaining that attentive look.

Don't we look all serious and scholarly-like? 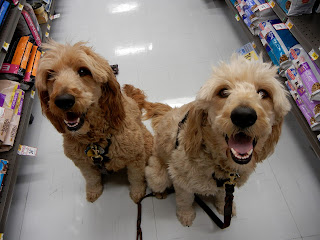 Sadly, our snow has pretty much vanished, and we are back to frolicking in mud.

On Saturdays we are continuing to get 'out on the town' in doggie class - all in an attempt to get us more comfortable in noisy, chaotic situations.

We spent most of Saturday's class in World Market, where we posed with all sorts of stuff, to the amusement of Mom and Jessi.

And since all the Christmas/holiday decorations were out, there was much posing with holiday stuff.  (Although, I will have you note, NO antlers and elf hats...)

And a bunch of tree ornaments that Mom and Jessi found vastly amusing.

And yes, we continued to work on our Looking Attentive for Treats 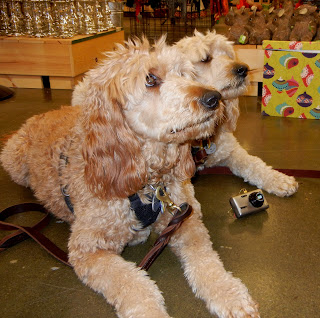 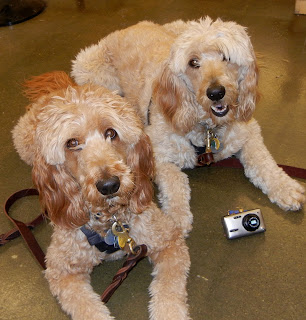 After that, we headed off to TJ Maxx, for more chaos and confusion.

Oh, did I mention that our snow is vanishing?

Mom spend most of the long weekend putting together the annual calendar, and if she can figure out a way to share it digitally to those who won't get a physical one, we'll post the link.  I kept looking over her shoulder as she worked, and it looks pretty good!

*kissey face*
-Fiona and Abby the Hippobottomus
Posted by Lucy-Fur, as typed by Dr. Liz at 7:35 PM 10 comments:

I noticed that Mom hasn't updated our bloggie, in, like, EVER.  When I asked her about it, she was all like, "I've been so busy.  And there hasn't been anything interesting going on."  Nothing interesting?  Hello?!?  Just because Mom works all the time doesn't mean that we aren't doing fun stuff.  We've had doggie classes, we've had warm weather, we just got a ton of snow.  How is this 'nothing interesting'?  With that calmly presented reasoning, Mom agreed that perhaps she had been slacking a wee bit, and would rectify the situation forthwith.

So...  From our last post of snow, it got really warm (60F+) for a while, and all our snow melted, which made for funballs melting snow times and funballs doggie classes. 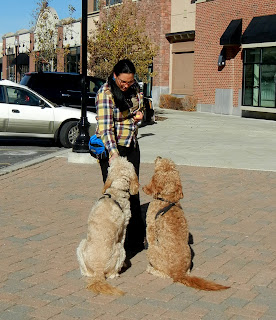 For those of you who have been wondering, we are continuing our doggie education in the hopes of eventually being awarded a Ph.D. in Sucking Up for Treats.  Heehee!

And we got in some funballs frisbee time in the warm fall weather. 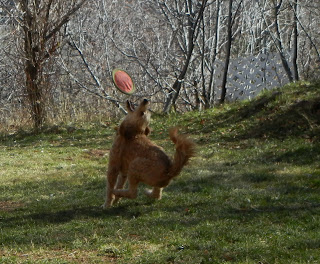 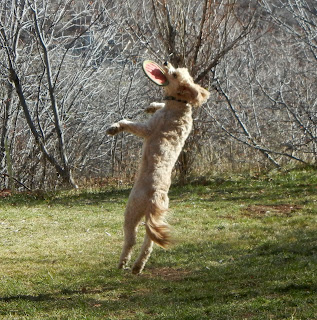 And, of course, there were plenty of fall zoomies.


But, as you all, know, there are NO zoomies like snow zoomies!  And winter finally came (back) to Utah, dumping almost 2 feet of snow at our house from Friday to mid-day Sunday. 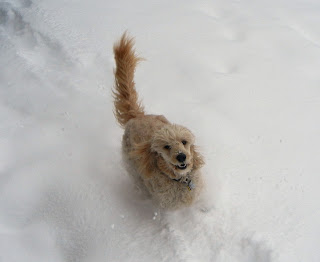 And Dad got to play with ALL his snow toys over the course of the weekend...

Apparently Dad isn't super thrilled when he gets to pull out all his snow toys, multiple times.  Huh.  Imagine that!  Heehee!  But you did a great job on the driveway, Dad!

Despite the inclement weather on Saturday, Mom chauffeured us to doggie class on Saturday.  It was still snowing when we went to class, but luckily Mom's little car is a good snow car, and we got to doggie class safe and sound.  Which was a good thing, as unbeknownst to us, there were two youngsters who were finishing up their 'Puppy 1' class, and were getting a taste of what future classes might be like. 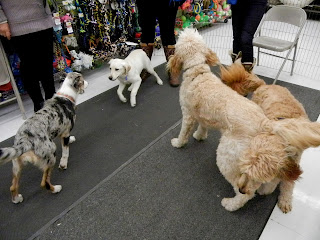 The youngsters (both 6 months old) were a tad wild and crazy for my taste, so I took advantage of my sister's ample bottom and hid while she schooled the youngsters.

Of course, the class was not all bitey-ing.  There were a whole bunch of tasks to 'complete' throughout the store, and we were able to show off our higher edjumacation.

There were lots of other people and doggies in the store, so we had a great time.  And Mom had a fun time playing around with Photoshop settings...


While we were having fun, the pups were, well, being crazy puppies...

But lest you think our younger companions were total doofuses, we feel compelled to post at least one picture of them behaving, especially the labragal, who was such a suck-up! 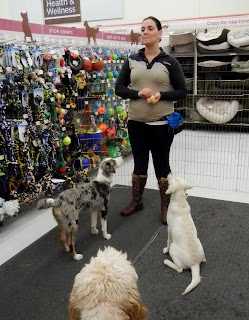 Anyhoo, after doggie class, we spent more time frolicking in the snow (and then coming in and melting...).  And then on Sunday we went on a walkie while Dad cleaned off the driveway (again).

And then in the afternoon, we spend more time frolicking in the snow. 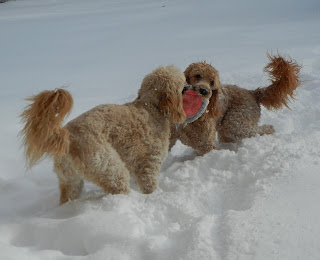 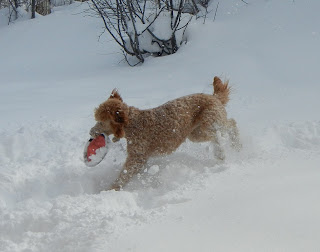 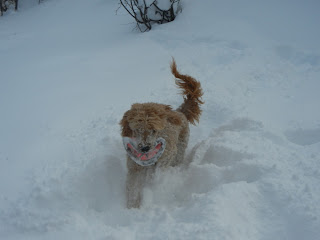 There was actually so much snow that we got a little bogged down at times.  (And lost two frisbees... Good thing Mom has a number of Emergency Backup Frisbees!) 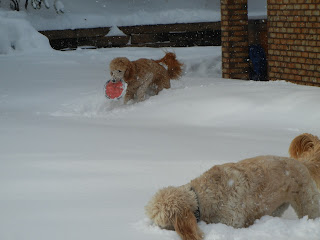 But this snow stuff?  PAWSOME!! 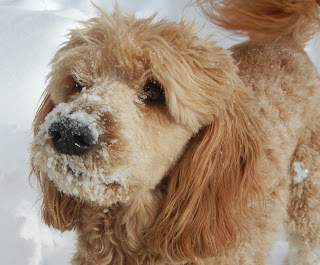 Now that the storm is over, the temps are going to be quite cold (it's currently 11F, and is expected to get close to 0F tonight...).  I guess winter is here!  At least for a bit!

*kissey face*
-Fiona and Abby the Hippobottomus
Posted by Lucy-Fur, as typed by Dr. Liz at 7:53 PM 14 comments: