Just this last weekend, we were frolicking in the sun, catching frisbees with abandon, 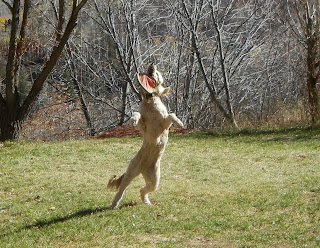 and zooming around the yard in fun times fall zoomies.... 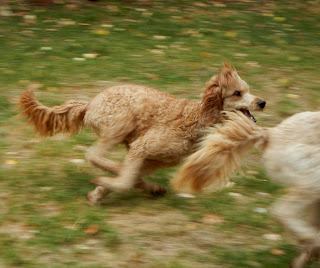 All the while, we were wondering where our early-season dose of white stuff was.   I mean, usually by this time of year, we've had at least a dusting of snow.  But not this year.  At least not until last night, when we finally started to see a few flakes falling from the sky... 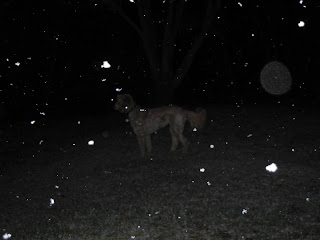 And by this afternoon, we had some measurable snow (but not enough to create issues with Mom's commute - for which she was quite happy!). 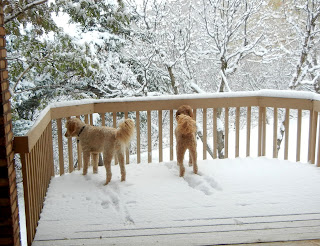 And when Mom got home, we went out and test out the first snow of the season. 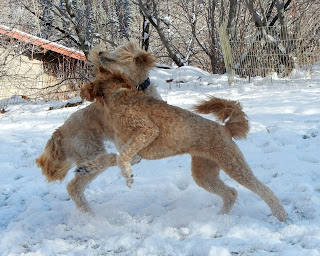 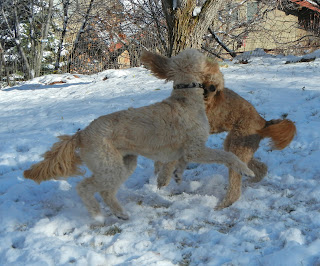 Seriously, bitey-face is ALWAYS better in new snow.  Just trust us on this one! 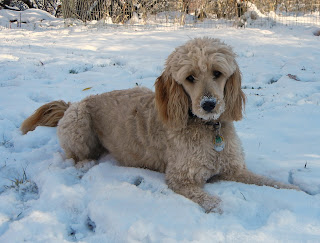 Yes, Abby took advantage of the snow to do what she does best!  (Biggify at your own risk - apparently this picture has caused uncontrollable desires in some people to give snooter kisses to snowy-snootered dogs!  Okay, fine.  I'll admit it; Abby's doing her cute thing!)

It's a little unclear if we are going to get more snow or not (the weather-guessers say yes, but the radar looks a little empty at the moment), but it's supposed to stay cold for a couple of days, so we might get a few more chances to enjoy the first snow of the season!

And for those of you pups who would like some early snow, (you know who you are, Khyra, and the Herd, to name a few) we'll get the rubber band wound up on AirFiona and headed you direction, so you can enjoy the white stuff with us! 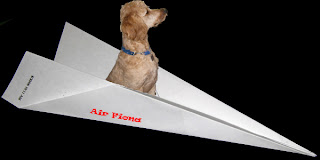 This weekend was a mixed bag - rainy and wet Friday and Saturday, and beautiful today.  Mom, of course, elected to take photos on Saturday when it was still cloudy...  However, it made for some cool photos, as fall has come (and is almost gone) in our neck of the woods.

*kissey face*
-Fiona and Abby the Hippobottomus
Posted by Lucy-Fur, as typed by Dr. Liz at 8:47 PM 8 comments:

We didn't have doggie class last week because Jessi (the turkey hotdog goddess) was under the weather, so we spent the weekend annoying Mom, erm being well-behaved doggies, as usual.  Heehee.

This weekend, however, we were back to our usual funballs doggie class.  (Although Jessi informed us that she was abandoning us for THREE WEEKS to go on some trip to Israel.  I was shocked.  She'd rather go see 4000+ years of conflict history rather than spend time with us?  Really?  The nerve!  Mom, on the other hand, is all excited for Jessi and can't wait to see photos of deserts.  Um.  Hello?  Mom?  Didn't you see ENOUGH desert as a kid?  *sigh*)

Since, yet again, we were the only doggies in class (apparently this has more to do with the aforementioned abandonment than us having scared off all the other local doggies) we did more 'about town' stuff.  Instead of going to Bed, Bath and Beyond, we headed off to World Market, purveyor of all sorts of stuff.

Including baskets and gardens. 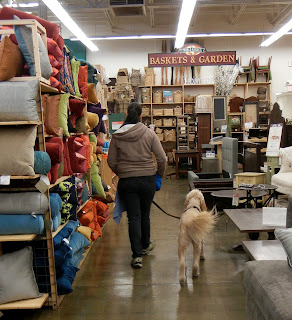 And, apparently, lots of silly hats. 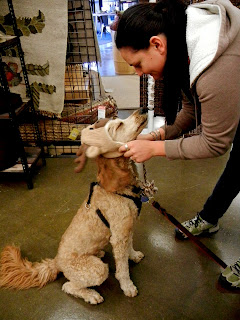 Luckily, I was not the only one suckered into wearing silly hats...  Abby was turned into a frog.

Being a good sport, I agreed to pose with Mom...

Jessi then thought it would be fun to put Abby in a panda costume.  Abby was less keen on this whole idea. 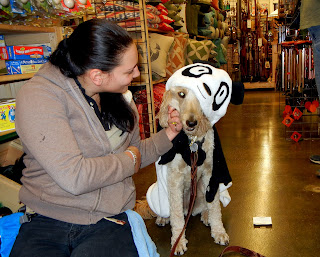 But after this, I bet Abby will think the elf hat and antlers for the Christmas photos will be a whole lot LESS humiliating!  Or maybe not...

After deciding that an unhappy panda was not a good look for Abby, we continued on...

And in the same section as the ginormous martini glass, we found some collar-size flasks.  Now I can pretend I'm a St. Bernard!  Alas, since this is Utah, we would have to go to a totally different store to get the brandy... 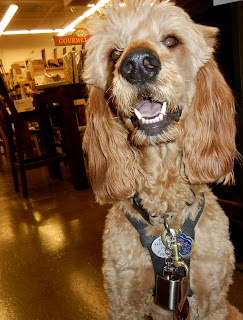 And then we saw a doormat that reminded us of our pal Garth Riley, who is a pirate at heart!

We then left to head out for TJMaxx.  (Why?  Well, because like Mount Everest, it's there...)  On the way, we met another student of Jessi's - a very handsome boy named Finn.  I'm kinda shy around cute boys, so we took the 'meet-and-greet' kinda slow.

But in no time, we were sucking up for treats together. 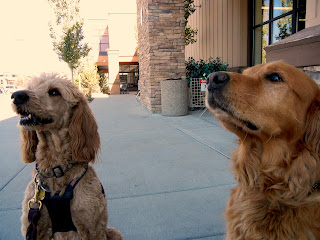 (Abby said hello too, but there aren't any photos as Mom was handling Abby and the camera...)

Then we went into TJMaxx and went shopping for ugly sweaters. 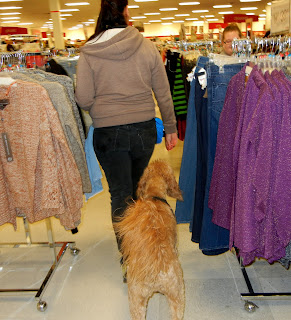 After much perusing, we were approached by a short human.  And since we were ostensibly working on 'exposure to new environments' I had to lie down nicely while this skittish little human tried to work up the courage to pet me.  Because I'm SO SCARY! 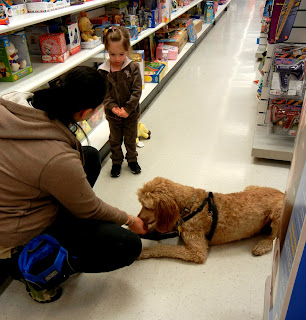 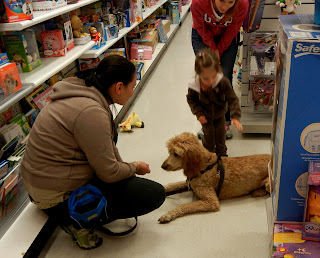 Abby, on the other hand, was thinking it was pretty cool that she was getting lamb lung treats without having to have little humans approach her.  I guess it made up for the panda costume...

Maybe Abby was resisting the panda suits because she really has an interest in frilly princess dresses.... 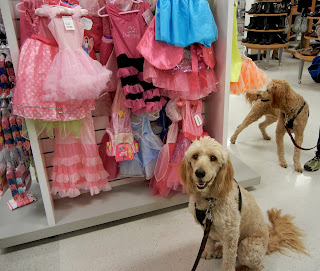 *kissey face*
-Fiona and Abby the Hippobottomus
Posted by Lucy-Fur, as typed by Dr. Liz at 8:27 PM 13 comments: