The Eyes Have It

Well, apparently one of my eyes has 'it'. Where 'it' is a "uveal melanoma" (I had Mom look that up for me).  It sounds bad, but apparently it is benign, but if it isn't zapped, there is the possibility that I would lose that eye.  Which doesn't sound too good to me. Not that there is anything wrong with one-eyed doggies, but if it is possible for me to avoid the pirate look, I would just as soon not have to go around with a parrot on my shoulder.


Anyway, I am on some antibiotics for another issue (nothing serious) so when I am done with those, the ophthalmologist (Mom now knows how to spell that!) vet will laser the melanoma thingy and I can get on with things. I will keep you posted, but hopefully it will be No Big Deal! (And Mom is hoping that our next visit to the vet in Salt Lake will not then entail a drive home in a snowstorm during rush hour....)

And this laser zapping procedure shouldn't affect my frisbee activities. 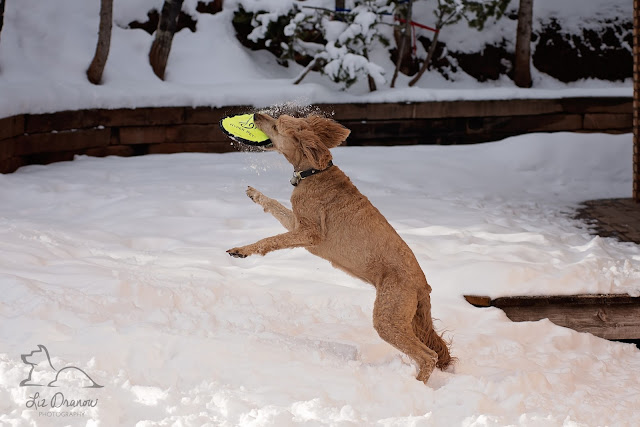 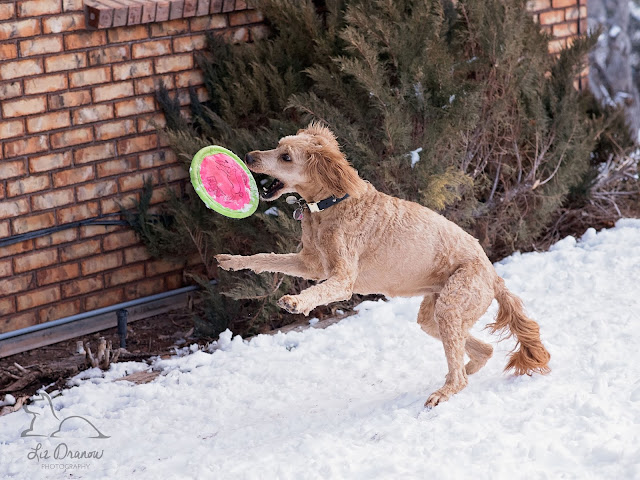 Which is a good thing, because clearly Daisy isn't going to be a Frisbee-catching queen.  (And Lucy has No Idea what to do with a Frisbee in the air...)

As I said, Lucy has no idea what to do with the Frisbee when it is in the air, but she's very photogenic once she gets the Frisbee off the ground... 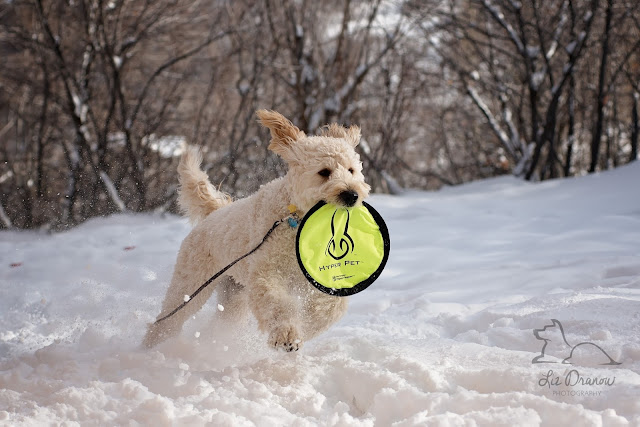 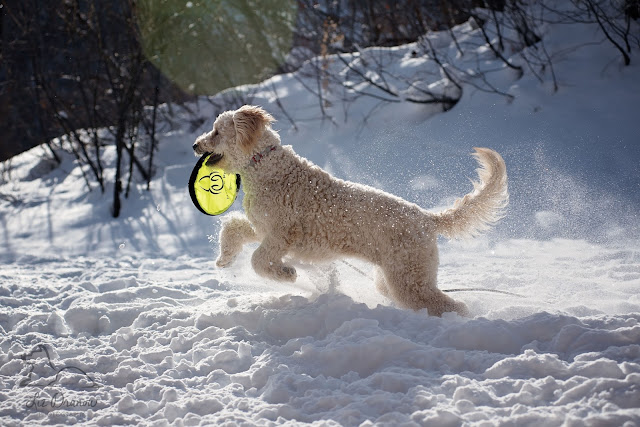 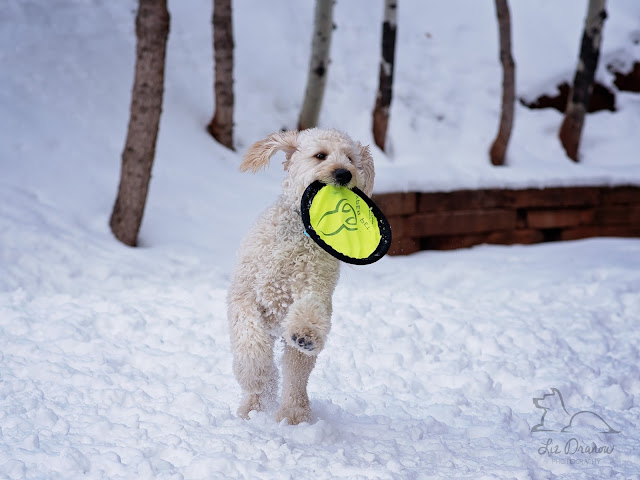 Daisy and Lucy-Fur can spend hours and hours and hours (and hours and hours) playing bitey-face inside, but when they get outside, they apparently forget how to bitey-face.  (Well, Lucy does - Daisy is perfectly happy to bitey ME...)  Instead, they like to chase each other (I stick close to Mom during these events, as 100+ combined pounds of zooming beasts is a little terrifying).  Usually with frisbees. 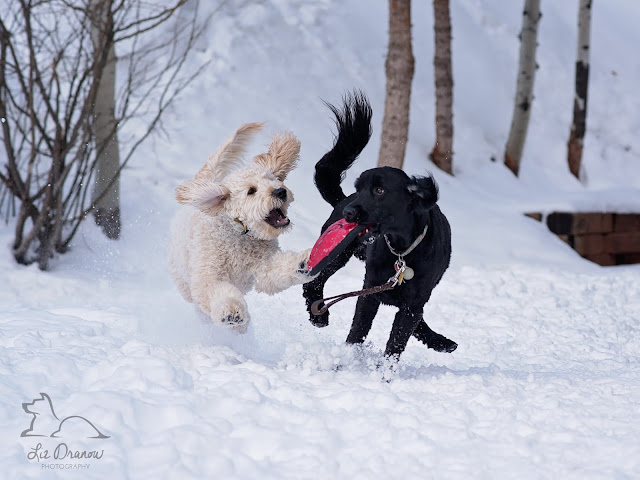 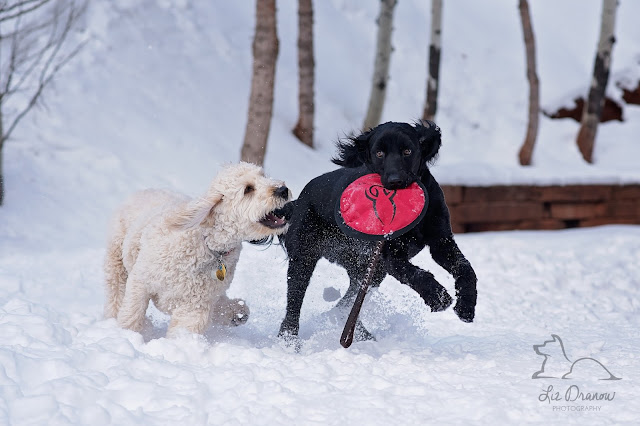 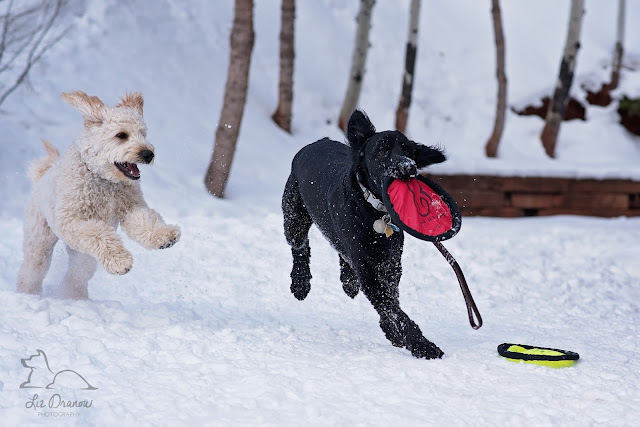 The do like to tug the frisbees around (you will notice that we have some new frisbees - while the youngsters haven't killed any frisbees lately, they have managed to bury several in the snow, as neither seems to remember that they are both part retriever...).

And I think this is what Daisy has to say about all of this!

Heehee.  Seriously, I think Lucy-Fur's middle name should be Karma.  Because all of this makes me giggle!

In Which We Get Some Snow

And by 'some', I mean about 16 inches when it was all said and done.

The youngsters, as expected, behaved like crazy nutters in the snow (although I was a little worried about Lucy getting lost out there...) 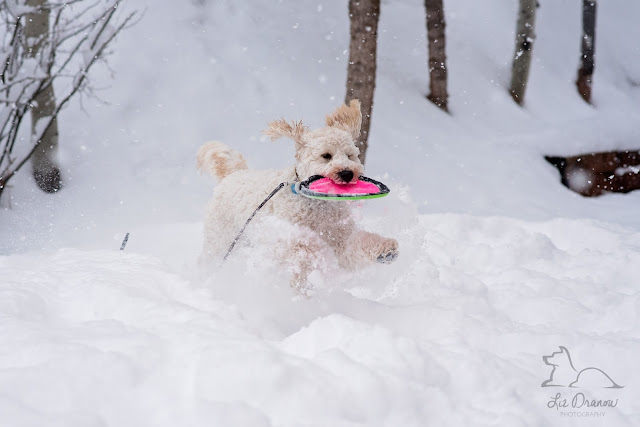 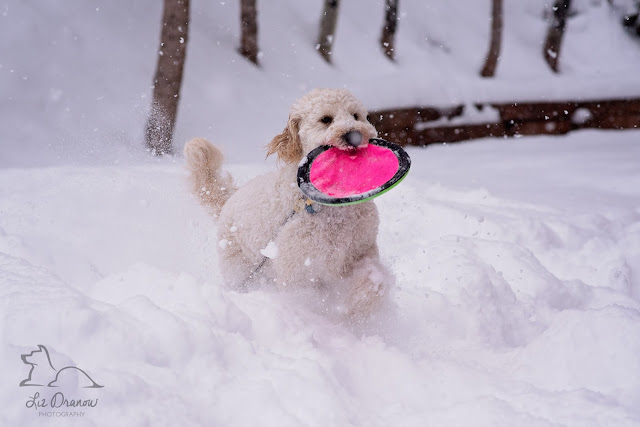 I mean, her leggies are getting longer, but there was A LOT of snow out there!

The two crazies took it upon themselves, of course, to play tug-of-war and lose several frisbees in the snow... 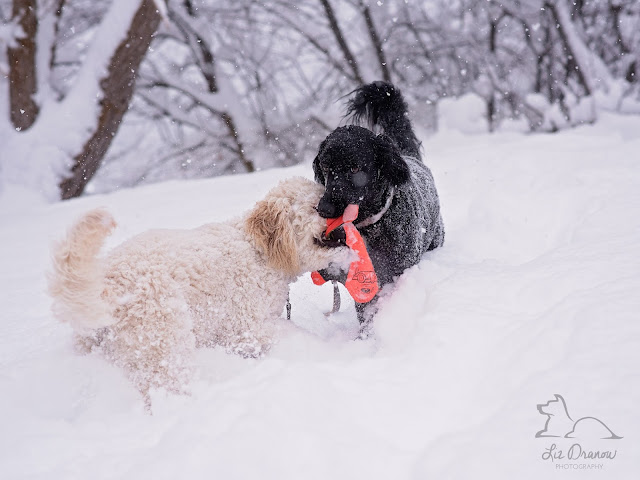 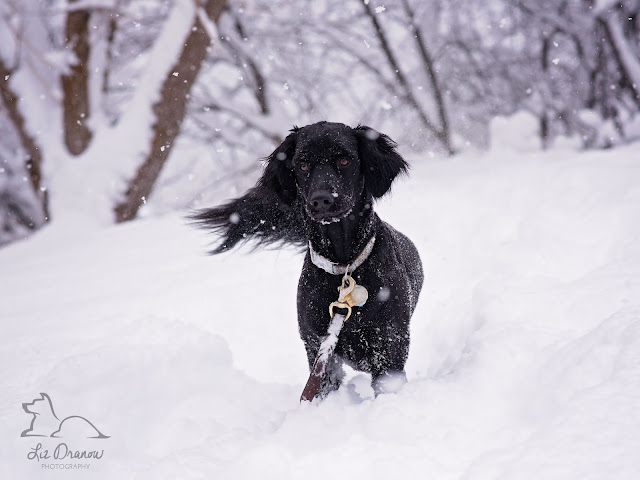 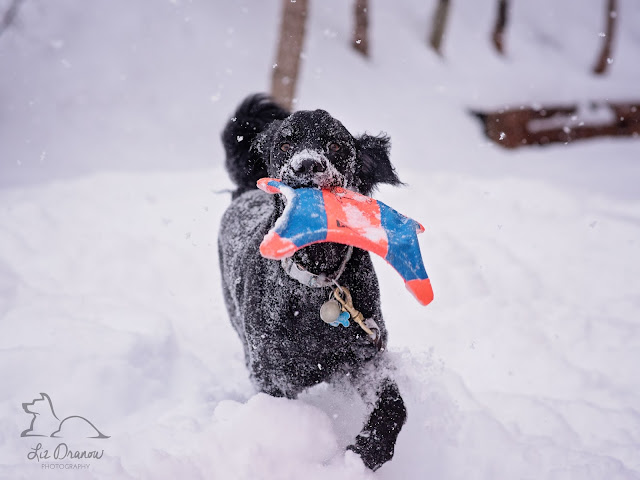 Where was I during all of this? Avoiding the crazies and trying not to get snowballs between my toes! 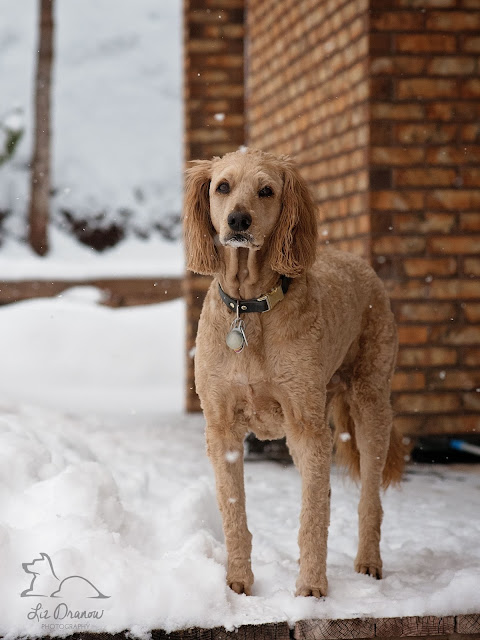 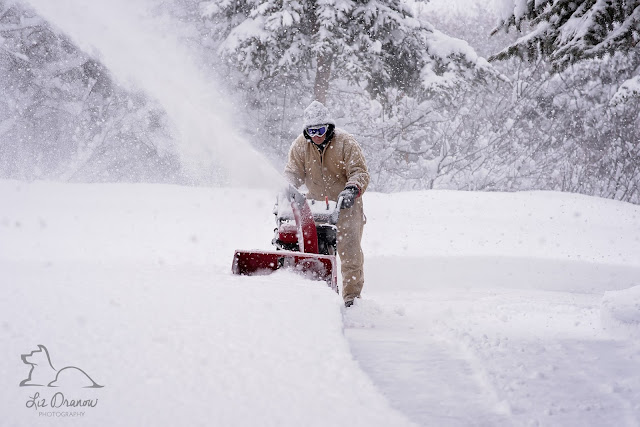 Because of the snow, a crazy dog lady that Mom knows through the interwebs was stuck in Salt Lake City as she was driving east with her crazy dogs, and so this afternoon Mom took the youngsters down to the park at the bottom of the neighborhood to meet the crazy dog lady (who is, apparently, nice and not too crazy!).  Mom did get to meet an interwebs celebrity, Big Carl.  As you can tell from the photo, Big Carl isn't physically big, but like my Great Uncle Billy, Big Carl is big in spirit. In fact, I think he was a little disappointed that Mom hadn't brought a moose for him to harass.  (Big Carl and his family used to live in Alaska, and he was used to taking on mooses!) 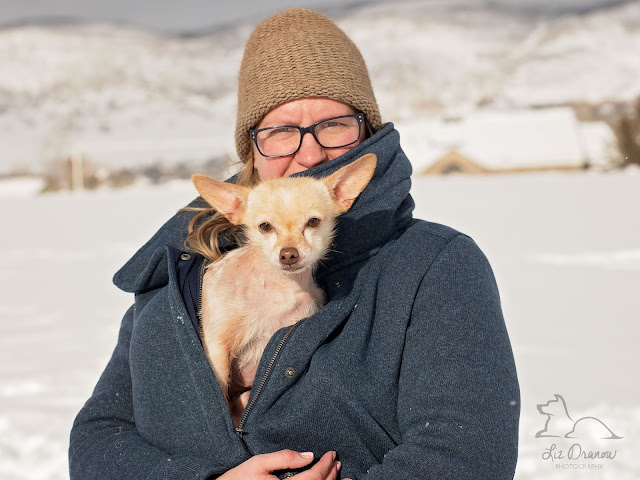 I didn't really want to deal with more crazy dogs, so I stayed home and kept Dad company while Mom and the youngsters met with Big Carl, Arlo (the brindled doggie) and Mesa, who is not a young pup, but loves her frisbees. I think if it had been a little warmed, I would have really liked Mesa!


We are all happy to have snow, and Mom and the youngsters thought it was quite fun to meet some doggies who have only existed on the computer until now! Heehee!

The Newest Member of our Levitating Team

Yep, that's right - Lucy has finally learned how to fly! (It's about time! Although maybe her prednisone-enhanced Buddha belly took away from her ability to fly....)


Daisy is clearly feeling the pressure to show off her flying skills, too! 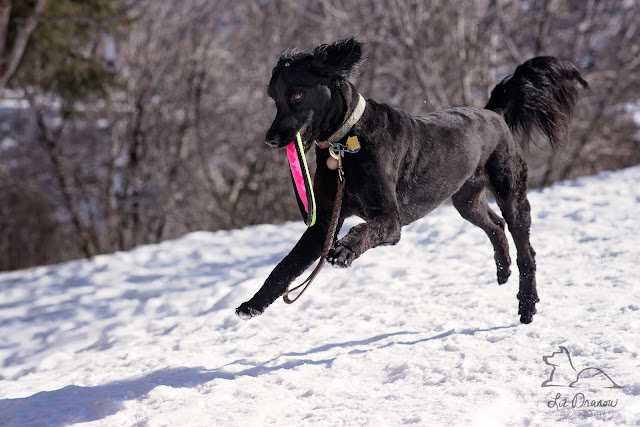 Me? I have been in the mood to keep my feety-feets on the ground.... 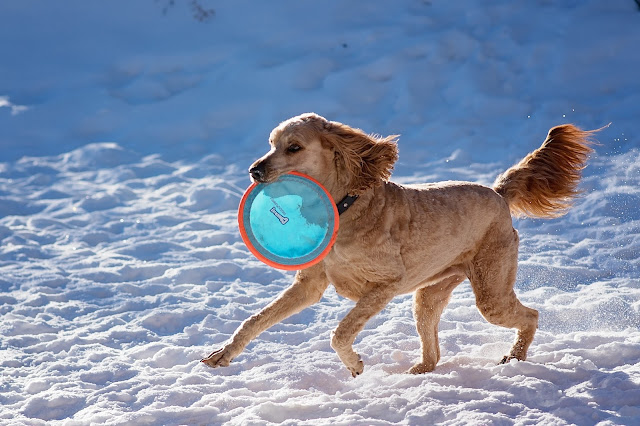 And I'm not even shy about the occasional frisbee mishap...


Speaking of silly kids, Lucy-Fur had her 7 month birthday this weekend.  Since the wee furball can get on the couch by herself now, I guess I don't have much choice in these photo sessions, so I guess I can look enthusiastic about them (especially when Mom breaks out the good snacks)....

And here is Little Fur's monthly photo with her milestone board.  Yes, she really can get on the couch by herself. Luckily she doesn't do it too often without my permission!  (Which is more than can be said for Daisy...) 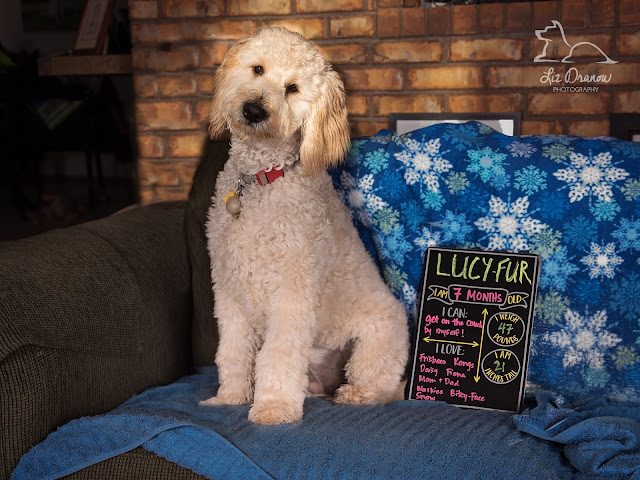 And yes, even I will admit that the wee beastie is cute.  (And she's not anywhere near as crazy as Daisy!) 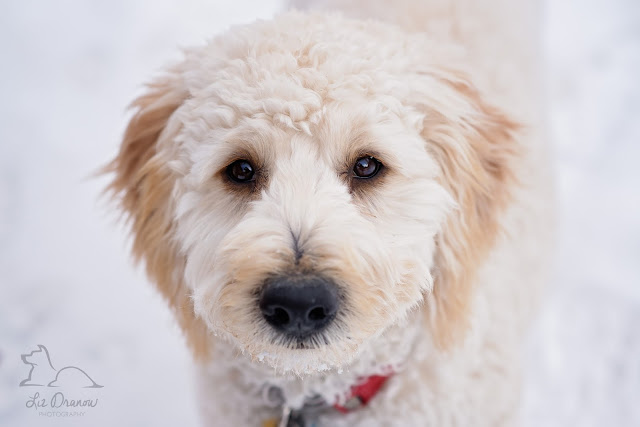