Mom's a Slacker, but I'm Trying to Catch Up Anyway

Mom has been too busy to update for me, so blame her, not me! However, I'm not too upset with her, because when it comes to priorities, she has decided that playing ball with me (even if she throws like a girl - which means that Dad feels guilty and comes out and plays with me, too) is more important than updating the bloggy. And I wholeheartedly agree with her.

So, I have been getting in lots of chasing after things, and hiking, 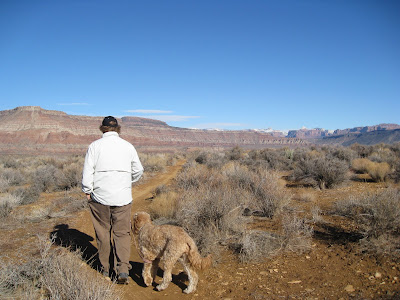 and napping, and well, general hanging out. 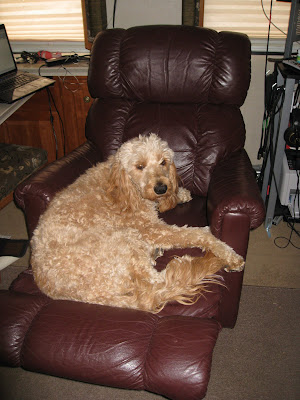 Mom and Dad have been taking advantage of the nice weather (in the 50s) and have been bye-sickle-ing a bunch. 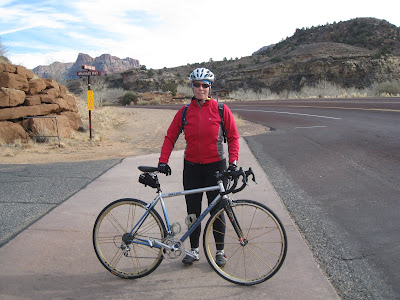 They are trying to squeeze in as much of this bye-sickle-ing as possible, because we are going to be going back to the House Without Wheels in about a week, and then they won't be able to bye-sickle until all the snow melts. Which sort of doesn't make sense; get in lots of bye-sickle-ing in preparation for not bye-sickle-ing. Okay. Whatever makes them happy!

Since we are going to store the House With Wheels down south here, Mom has started the process of cleaning out the fridge, doing laundry, stowing stuff, figuring what goes to the House Without Wheels, and how it is going to get there, as we will be traveling home in the Box On Wheels, and with me sitting in a back seat, and TaiChi and Bufus both in separate crates, there isn't going to be a ton of extra space. Especially since I'd like to be able to stretch out on the drive home. Luckily it's only 4 hours or so.

So, Mom has been busy with that, cutting down on her bloggy-following time. She has also been frantically trying to finish the annual calendar, in the hopes that it will arrive to all the interested parties somewhere before the New Year. She has been all anxious about boiling down all of last year's pictures into 49 pictures. I can see how this would be tough, as there are So Many fantabulous pictures of me, and Mom has to include pictures of TaiChi and Bufus, as well. 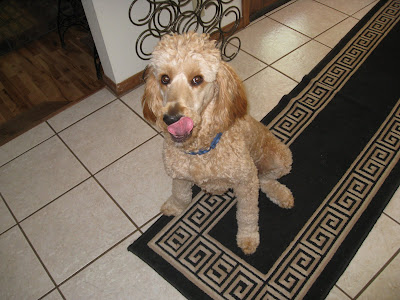 I mean, really, when you've got hundreds, if not thousands of pictures of ME, I can see how it would be stressful to pick a representative few. Especially since Mom feels obligated to include a few pictures of the car racing stuff each year. But, I'll have you all know that this year the calendar is very heavily loaded toward us, and not so much on Mom and Dad! (As it should be, I might add.)

Mom also had to hurry up and finish a special present for Grannie, so she could mail it in the hopes that it would get the North Carolina in time for Santy Claws to put it under the tree.

So she has been busy, and apologizes for not being able to help me keep up on bloggies. But she's doing her best.

In the meantime, Happy Solstice! May your fire burn bright! 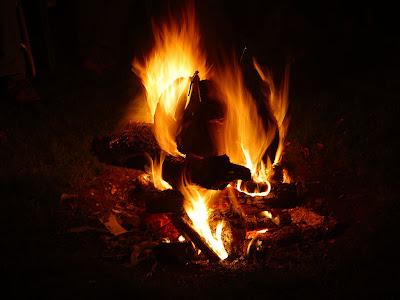 *kissey face*
-Fiona, the doggie with the slacker Mom

PeeEss: OOOOHHH!!!! I forgot the Most Important News!!!! #$%@#$^ Secretary. She should keep notes, so I remember everything! My little sister was born about 2 weeks ago. When we get back to the House Without Wheels, Mom and Dad are going to go see her (well, technically go pick her out, but whatever). And in less than two months, I'm going to be a Big Sister. This actually makes me sort of nervous. But I'm still excited to be a Role Model. And it sounds like Abby (that's her name) is going to have her work cut out for her. Mom is already investigating puppy classes and obedience training, and all those things that I managed to skip. Heehee! Of course, Mom keeps saying that Abby is going to be a "Good Dog", but since I have no idea what that phrase means, I'm just ignoring her!
Posted by Lucy-Fur, as typed by Dr. Liz at 10:40 AM

I want to see a picture of you
bye-sickle-ing...
Happy Trails back home to the snow!
~K

Hi, Fiona!
As long as you are getting lots of attention... don't worry about not blogging!
Glad to know you are having fun with your mom and dad!
I am sure you are going to be the Best Sister for Abby!
Kisses and hugs
Lorenza

A little sister, so exciting! We know you are going to be such a good big sister.
We hope you and your family have a wonderful holiday season.

Ha! That is what my momma said about stupid PeeWee and he turned out to be a midget pain in the butt cracker dog hump meister. Good luck.

P.S. I know what you mean about lazy humans. Sometimes my momma reads the blogs and then closes the windows before I even get a chance to leave a comment!

Wow - you leave some really big news for the P.S. - Can't wait for more.

And our humans are preparing the S-RV here - except for the 2 feet of snow that surprised us. Something about somewhere warmer next week. Hmmmm. Could be fun.

We can't wait to meet Abby!! Yahoo!! I'm glad your secretary has been throwing the ball for you a lot. Even though we miss you.

Glad to ear the update!! Can't wait to meet Abby. I want to be a big brother, so maybe you'll be in the position to give me some advice when the time comes!!

Wow, Fiona - you're very busy and we loved that news about a little sister for you!

The gang here never saw me as a pup so they are really looking forward to seeing photos of Abby!

Safe trip home and we can't wait to read more about Abby!

We know you will be a pawesome big sister Fiona!

Smileys!
Dory and the Geeky Mama

We would much rather hear that your momma and dad are playing ball with you than blogging...Life can't totally be about the blog...

You are getting a SISTER! Thats totally cool! You will get to teach her all the importants of blogging, hiking and ball chasing.

NAK and The Residents of The Khottage Now With Khattledog said...

Abby is a furry lovely name!

My Arizona khousin has that name!

Congrats on the sis!

You know, slackers are my kind of people! :)

wow a little sister. I hope your mum doesn't spoil her too much!