Fiona’s Shore Leave, Or, a bad imitation of one of Dennis’ adventures*

Warning. This entry is only for the super-nerdy of you. The rest of you should just move along. There is nothing to see here. And certainly no reason to look upon me as someone who might show up to a Star Trek convention. I’m just saying. Seriously. Unless you have ever uttered the words “live long and prosper”, you should just keep going. And you probably might just want to keep going, anyway.)

As you may (or may not) know, the Enterprise (aka The House With Wheels) had planned shore leave on a warm, sunny planet, like Vulcan. (Although I didn’t bring my pointy ears with me, so I’m not sure how well I would have been accepted by the natives. But I digress.) 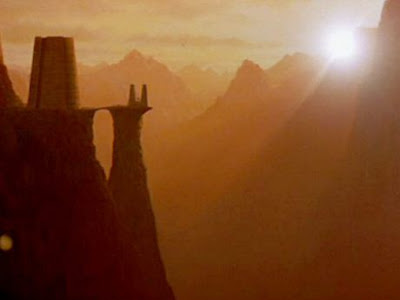 Instead, we seemed to have ended up on the ice planet of Hoth. 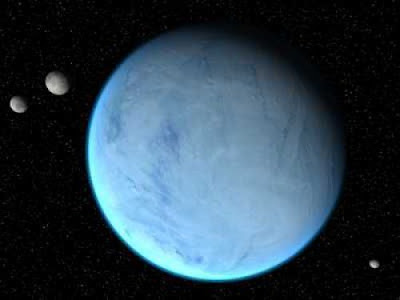 With no tauntauns, I might add, as Indiana Jones seems to have gotten there first. 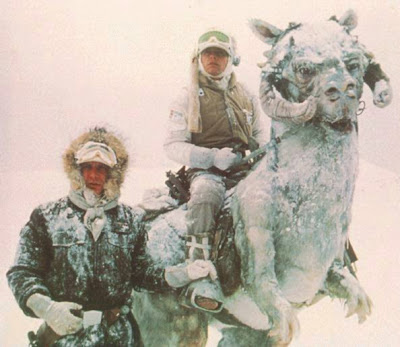 The Enterprise (aka The House With Wheels) was not exactly designed for ice planets. This is why most captains and crews take their starships to warmer climes when the snow starts to fall. But not us.

Finding ourselves on Hoth, we have been forced to rely on emergency power to keep the life support systems from freezing up. Because as you can see, engineering was having a bit of a problem dealing with the weather: 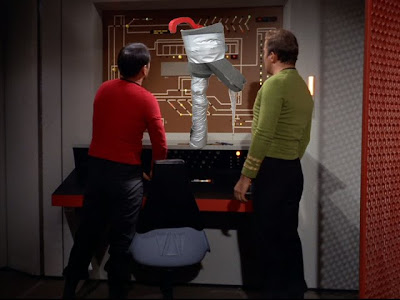 Mr. Scott suggested that we use extra insulation. (Gee, ya think, Scotty? And they call you a miracle worker?!?) 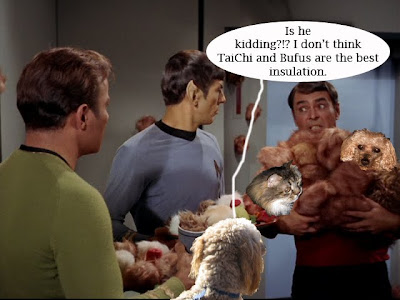 Captain Kirk, in his ever-helpful manner, suggested that Scotty try something else. I stood in disbelief. If this is how the Enterprise is really run, I think I’d better see if Captain Picard is available next time. 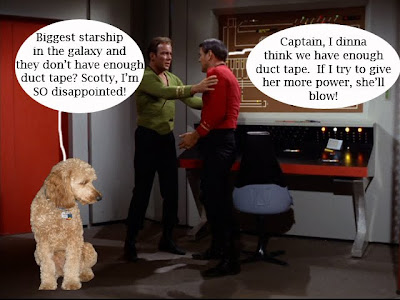 But Scotty got the life support system problem sorted out, eventually. 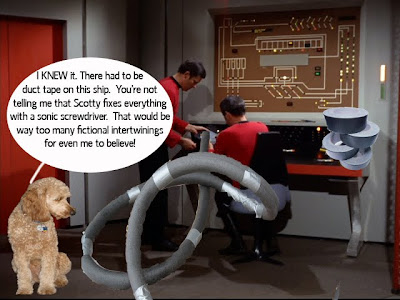 However, since we have been using emergency fuel to keep life support going, Scotty needed to try to get full power back. Since Captain Kirk decided that it was the perfect time to strike a dramatic pose, I decided to actually be useful and get us some fuel. Because the Enterprise runs on diesel, after all…. 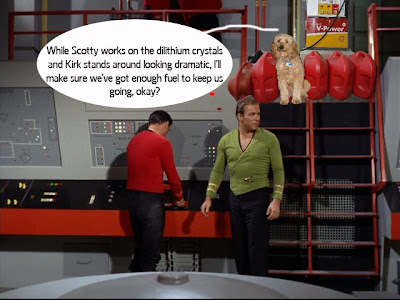 Anyhoo, when it was all said and done, life support systems returned to normal, we had full power again, and enough fuel to take us to the edges of the galaxy. And, it looks as though our planetary climate might improve. Maybe. 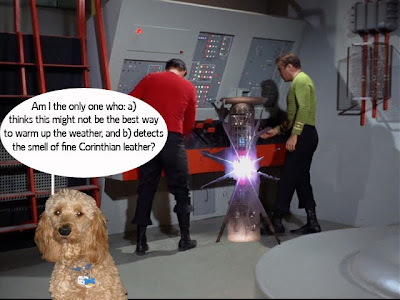 And now, I'll go boldly where no dog has gone before: into hiding for even being involved in this "adventure".

Translation for those of you who have No Idea What I’m Talking About: It’s been much colder than usual in southern Utah – most natives tell us this is the coldest they have seen it in ages. Yeah, lovely. We insulated our water hose, but were still having problems with the spigot outside freezing, so after some help from one of the maintenance guys, we got it unthawed and insulated. It has been down in the teens at night, though, so Mom and Dad have been letting the faucets drip just a bit so the outside pipes don’t freeze in spite of the insulation.

The House With Wheels has a thing called an ‘Aqua-Hot’ which run on diesel, and provides the heat for the furnace, as well as hot water, and keeps the pipes/tanks inside the coach from freezing up. Because it runs on diesel, and well, it has been really cold, we have been running it pretty continuously . Which means that we’ve been burning diesel. We didn’t come in with a full tank, because we didn’t expect it to be this cold and have to run the heat this much. As it was, we began to get low on diesel. First, Mom tried bringing in some diesel in 5 gallon cans, but 15 gallons (we have 3 cans) doesn’t exactly make a dent in a 150 gallon tank. So Dad got smart and found a fuel company that would send out a small tanker truck. They came today and filled us up – 100 gallons worth! Most of the RVs in the park have propane heaters, and have external tanks, but the few other big coaches like ours that run on diesel have been having the same problem with running low on fuel, and the tanker truck guy handed out cards, as others have been employing the 5 gallon gas can technique. So, we have water, we have fuel, and we are toasty warm. It is just too bad that it is icky outside, because I’d really like to go hiking! In the meantime, I’ll settle for playing ball with Mom and Dad.

*With apologies to all parties involved, especially Dennis, for being remotely associated with this fiasco, even it is only because he is mentioned in the title...

Oh! And duh! I totally forgot to include the picture of refueling of the Enterprise by the fuel company... 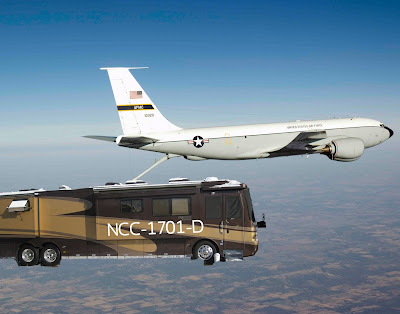 Labels: apologies, Dennis comma apologies to, diesel, duct tape, life support, star trek, where is Jean-Luc when we need him?

If we liked your post, does that make us nerds?

Ah, the joys of living in the House on Wheels, huh???
We have a propane water heater in ours...
It got so cold a couple of years ago in Montana, we used all our on board water, because the outside
H2O hose was frozen for a week...
Hope your weather improves soon!
~K

I love the refueling shot, and Fiona looks so cute with the Enterprise crew :)

Scary is that I totally understood the post without reading the explanation....

I am sooooo a super geek!!!

NAK and The Residents of The Khottage Now With Khattledog said...

I bet they are furry yummy!

Loved your post. Very entertaining. Quite a pic of the refueling. Fiona you look fantastic as part of the crew. Best looking member.
Tailwags
Ernie & Sasha

Ah yes! We can relate...temps in the negatives and the cottage is getting FIVE FEET of snow!! You did answer a few of my questions about how you keep your house on wheels running in the cold temps though. We haven't taken ours out yet in the super freezing weather! Your pics rocked!!

Fiona! Living with a dorky uber geek, I loved your most dramatic post. We know all about those space missions. Thank goodness you were able to refuel.

Having seen the new Star Trek movie recently, I can tell you that the Entrerprise is actually powered by steam.

It was a very interesting and informative post. You good good as part of the Star Trek crew. We do like the re-fueling photo.

Do keep warm there and we hope you are having a great weekend.

hello fiona its dennis the vizsla dog hay wow i see yoo met my frends capn kirk and mr scott!!! i had no ideea mr scott noo so mutch abowt duct tayp!!! i am glad yoo arnt going to freez on hoth becuz i wood miss yoo if yoo did!!! ok bye

Well we may not get all of the Star Trek jokes, but we totally understand the S-RV issues. We are propane, but that does not mean everything works perfectly in really cold weather. We camped last January when it hit 0F and we certainly had "system challenges." But we did survive.

Hi, Fiona!
I was sure Dennis would say something about his Star Trek friends!
I loved your post!
Kisses and hugs
Lorenza

We loved that post - someone here is a big Star Trek fan!

Hope you stay warm and get out on some more hikes.

At the risk of sounding like an uber-geek, I can't help but notice that there was a StarWars photo in there amongst all the StarTrek...

We had the same problem in upstate NY - had to use a hairdryer to thaw the hose!! Need to look into the Aqua-Hot thing for Big Earl...