Nose Bombs and Snow and the Doodle Launcher

Let's get the 'nose bomb' thing out of the way.  For those of you who don't know what a 'photo bomb' is, it's when a person/dog/thing unexpectedly shows up in a picture.  Mom wanted to get some pictures of me sitting, being the good dog that I am.  And here I was, being a good photographic model:

All as it should be.  Until Abby decided that since she hadn't been the center of attention for all of 3 nanoseconds, she should be more involved and she nosed her ginormous snooter in front of the camera.  And thus she nose-bombed my photoshoot.

You see me still sitting patiently in the background...

But I had the last laugh.
But it's all good.  I love my sister and her ginormous snooter.  And you notice that while Abby features in a lot of the action photos, there are NO pictures of Abby sitting patiently.  Just saying...  Heehee!

Speaking of action photos...  We've had snow on and off for most of the week, and with cloudy skies, by the time Mom gets home from work it's sometimes hard for her to get good action shots, but she keeps trying. 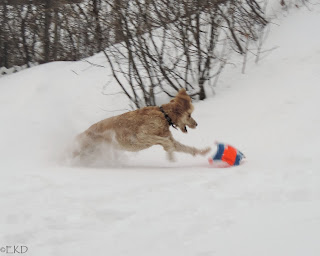 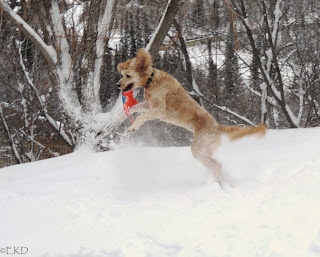 This weekend we had a combination of sun and snow, and Mom tried to take advantage of the few sunny hours to get more action photos. 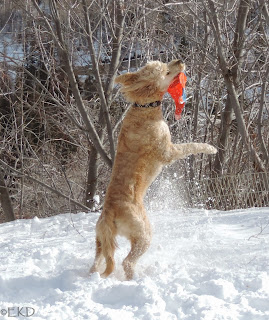 We were having a grand time in the snow going after frisbees when it appeared as though the 'Doodle Launcher' (the mythical device which is credited for Abby's 'amplitude' in her frisbee leaps) was on the fritz...


Abby didn't pick up on the fact that the Doodle Launcher was possible broken, until this 'fling' late in the afternoon...

Luckily, Abby was retrieved in one piece while the sky started to cloud over again. 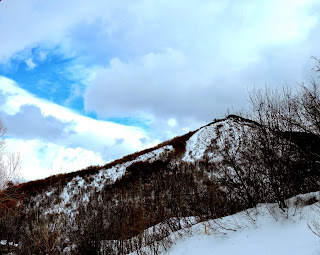 We then continued our frisbee antics throughout the weekend. 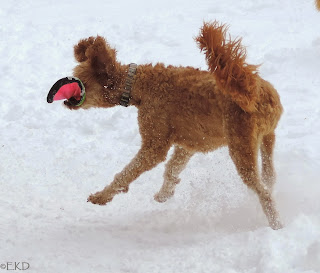 On our walk Sunday morning, it was snowing and very windy - to the point that the Donner Party (us) decided to turn back a little before the halfway point.

Of course, Mom has also spent time getting head shots - something about how pretty and/or goofy we are... 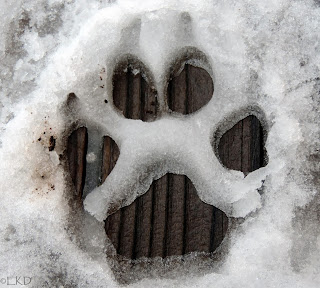 *kissey face*
-Fiona and Abby the Hippobottomus
Posted by Lucy-Fur, as typed by Dr. Liz at 6:55 PM

That last shot is Christmas card-worthy! We love Abby's smile!

The Doodle Launcher seems to be a quirky bit of machinery. I'm glad you let Abby volunteer for all the test flights.

We love all your high flying action.

We thought all your pictures were super...even the BOMBED one. UNTIL we got to the END ... your PAW PRINT in the SNOW was OUTSTANDING... JUST FABULOUS!!

We have nose bombed more then a few times and even left snootoodles on the lens :) Awesome awesome photos you took....especially love the pawprint

The Army of Four said...

We just love the close-up of your faces! They are just fantastic!

Love ya lots♥
Mitch and Molly

Another great week of snooter and snow launching photos!!! We think your Mama is rockin' her new camera!!!

Monty is ready to start that club whenever you are, Fiona!

hello fiona and abby its dennis the vizsla dog hay hmm this doodle launcher duz seem to hav its glitches hav yoo konsiderd investing in a doodlepult insted??? nice paw melty skulptcher by the way!!! ok bye

all our snow is disappearing :(

Stop on by for a visit
Kari
http://dogisgodinreverse.com/